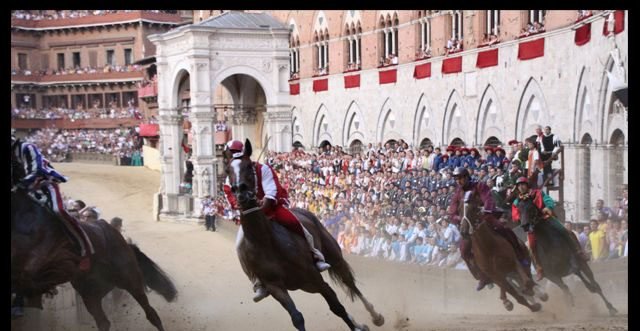 Every year in the Piazza del Campo the 2nd of July and 16th of August the Palio di Siena takes place, the most fascinating race in the world, during which every spectator, both from Siena and not, remains in suspense waiting to know who will win or how to he tells Siena which district will be kissed by the blindfolded goddess. These are magical days for Siena, where colors and scents take us back to the sumptuousness and sumptuousness of a medieval city in celebration.

The Palio that takes place on August 16th is dedicated to the Madonna of the Assumption and the winning district receives a painting, called “drappellone, cencio or cittaino”, made by a famous artist. This year the famous cartoonist Milo Manara was commissioned and his work will enrich the beautiful museums in the district, which deserve to be visited, in which these true works of art are kept.
The great Italian artist interprets the thought of every Sienese by declaring “I will celebrate the true horse protagonist in Piazza del Campo, since he can also win shaken. I want to exalt the horse and the love that the Sienese have for this wonderful animal “.
At the Palio, also called “career”, 10 Contrade out of 17 participate: seven are those that did not run the previous year in that Palio, the other three Contradas are drawn among the remaining ones. The districts that will participate this year in the Palio of August 16th are: Chiocciola, Oca, Selva, Aquila, Onda, Torre, Istrice, Pantera, Drago and Bruco.
The Palio di Siena is emotion for this I want to suggest five moments of this unique party that you can’t miss:

The Cantos of the Contradas An exciting moment not to be missed is the entrance of the people of each district in the Piazza del Campo that starts from the area called “Chiasso Largo”. The Contrada members, following their horse and jockey, praise proud festive songs.

General rehearsal dinner On the evening before the Palio, on August 15th, in every district a very suggestive propitiatory dinner takes place in the streets of the city; thousands of people intoning songs and hymns and listening to the jockey’s promises of victory, toast in the hope of being able to win the Palio the next day.

The blessing of the horse In Siena the sacred and the profane intertwine continuously. Don’t be surprised if you see a horse enter a church. In each district at 3 pm on August 16th there is “the blessing of the horse”: a solemn and exciting moment in which the priest, called “corrector”, solemnly pronounces the phrase “Go and come back winner” to wish the desired victory .

The minute of silence when the envelope arrives The starting order is preceded by a surreal, almost deafening silence; the square remains in suspense, waiting to know the starting order which is contained in a white envelope that arrives at the address by a traffic policeman and whose content is not known by anyone.

Contrada Museum All the 17 districts have their own museum where they jealously guard not only the ancient mounts that have paraded in the processions of historical walks that precede the race, but also ancient documents concerning the life of the district and all the “drappelloni” won true and proper works of art also made by internationally renowned artists.